Time to interview one of the authors of our beautiful boxed set, In All Things. This is a 13-book boxed set of devotional writings, with each book covering seven days of devotions, and based in Africa. Every one of these books has a totally different theme, each chosen by the authors, and yet wow! They all gel together so beautifully. 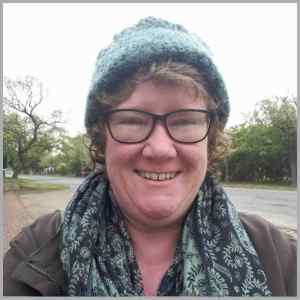 So today, I’m going to be chatting to Crystal Warren, author of the book, Steps of Faith – Seven Journeys.

Crystal lives in a small town which has actually earned its right to be called a city called Makhanda, recently renamed from the old name of Grahamstown. This is a small town in the Eastern Cape of South Africa. One must travel an hour and a half to Port Elizabeth or two hours to East London. The part of that which excites me the most is the distance from Port Elizabeth – my hometown! So she’s a fairly near neighbor! We have worked together on NaNoWriMo a number of times, acting as twin MLs on two occasions.

Talking to Crystal Warren, author of Steps of Faith - Seven Journeys, one of thirteen books in the boxed set, In All Things. Click To Tweet

Shirley: So – welcome Crystal! It’s great to have you here on my blog today. It’s been good working with you and knowing that we’ve actually worked together!

Crystal: Thanks Shirl. It’s been such an exciting project, and you’re right. It’s good that we’ve met in person.

Shirley: So Crystal, as you know, I invited all those who had volunteered to write one of the books of the set, to choose their own theme. What motivated you to choose the theme of journeys? Your full title was This was an unusual topic to me.

Crystal: Shirl, I suspect it might have been influenced by the lockdown as a result of COVID-19, when we were all at home and nobody was travelling anywhere. This was the longest period I had been at home without leaving town since I moved here thirty years ago. Several planned trips had to be cancelled. I was working from home, so not even walking to work each day. So physical journeys were very much on my mind.

When I started to think about which poems might fit together in one theme, I realised that a lot of my poems dealt with physical or spiritual journeys, and this seemed something that would work. 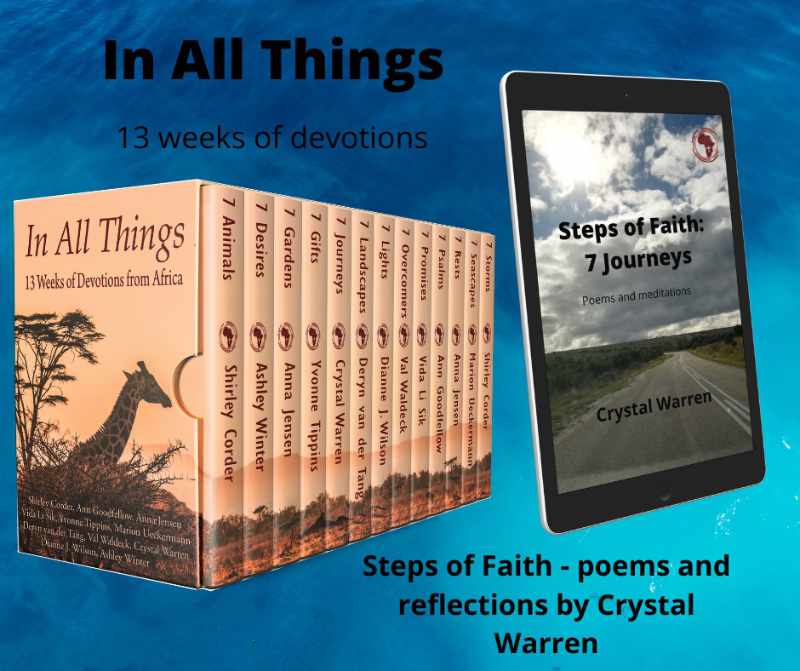 How did you find this experience?

Shirley: I asked you all to produce seven chapters on the theme. Did you find that easy?  Or was there one (or more) that caused you to struggle?

Crystal: I started with selecting a range of already-written poems that fit the theme. Then I prayed over them and wrote the reflection as one came to me. Some poems didn’t suggest anything that fit the devotional format, but fortunately, there were enough that did. In fact, I lost count and when I came to do the formatting, I realised that I had eight rather than seven. So then I had to choose which one to leave out. I think that might have been the biggest struggle.

Shirley: Okay, all the books were short. This was done on purpose. It was a lock-down project, and I wanted each writer to be able to complete a book within what I initially anticipated not being long. So each book is only seven chapters. How long would you say it took you to write the first draft? And from start to completely done?

Crystal: This is a difficult question for me. My book was based on poems. Most of these had been written previously, with the long process of editing and polishing. I did write some new poems for the project but in the end, only one of them made it into the book. So a lot of my “writing” time was thinking about which poem to use, which Bible verse fitted with it, and what message or reflection needed to be written. Because so much time had gone into thinking about this when I sat down to write the actual reflections they didn’t take that long at all.

Shirley: Crystal, have you ever participated in a boxed set or any other multi-author project before? If so, how did this one compare with the others?

Crystal: I haven’t done a boxed set before, so this was a new experience for me. My previous collaborative project was a children’s book for Book Dash where I worked with an illustrator, editor, and designer. Book Dash is quite frenetic as while the writer develops their story in advance, the book is edited, rewritten, illustrated, and designed in a marathon 12-hour creative session. It occurs in a room filled with teams of people each working on their book. It was great fun but exhausting. And once the day ended the Book Dash team took over the production side, eventually posting the book on their website where it was free for anyone to read or download.

With In All Things, we each worked on our own book, but we were able to support and advise each other. We especially did this when it came to formatting the books, developing covers, final proofreading etc. We also worked together to promote the book, each creating our own posts but tagging in the others. Because I haven’t done a devotional project before it was wonderful having more experienced authors on the same team who had lots of useful advice.

Shirley: The party from all accounts was a resounding success. What did you enjoy most about it? What was the biggest challenge?

Crystal: I really enjoyed being able to interact with our readers, as well as other writers. I learned a lot about the people I had been working with and got to know a whole lot of new people. It was also wonderful seeing how people responded to the posts.  We all asked questions in our posts to get people talking, but I found it amazing how people were really engaging and commenting on the replies of others. It felt like a real conversation between friends.

At times it got a bit hectic, trying to follow the various conversations. But at least with this text-based Facebook format, I was able to go back later and catch up on any threads I had missed. And to read a whole lot of new comments from people who had come online while I was sleeping.

Shirley: Yes, I know what you mean. With us being in South Africa, we ended the party officially at 9 pm (for us) which was before lunch-time for a number of our readers. I say officially because I don’t think any of us left the party until more like 10 pm or later. But the next morning, I was aware that many of us were there on the page catching up on comments and even posts from others of our teams that we had missed during the party.

Crystal, thank you so much for spending this time with us today. I wonder if you would like to read a short excerpt from your book? Perhaps from the introduction?

Over to you, the reader: Crystal’s theme was all about journeys. In just a few words, tell us which journey brings a special memory to your mind?

Get the Boxed Set here

Other authors in the set already interviewed:

Please sign up to receive regular updates from me. I promise not to spam you, and you are free to unsubscribe at any time. You will receive a copy of my 7-day book, God in the Unexpected, just for signing up.