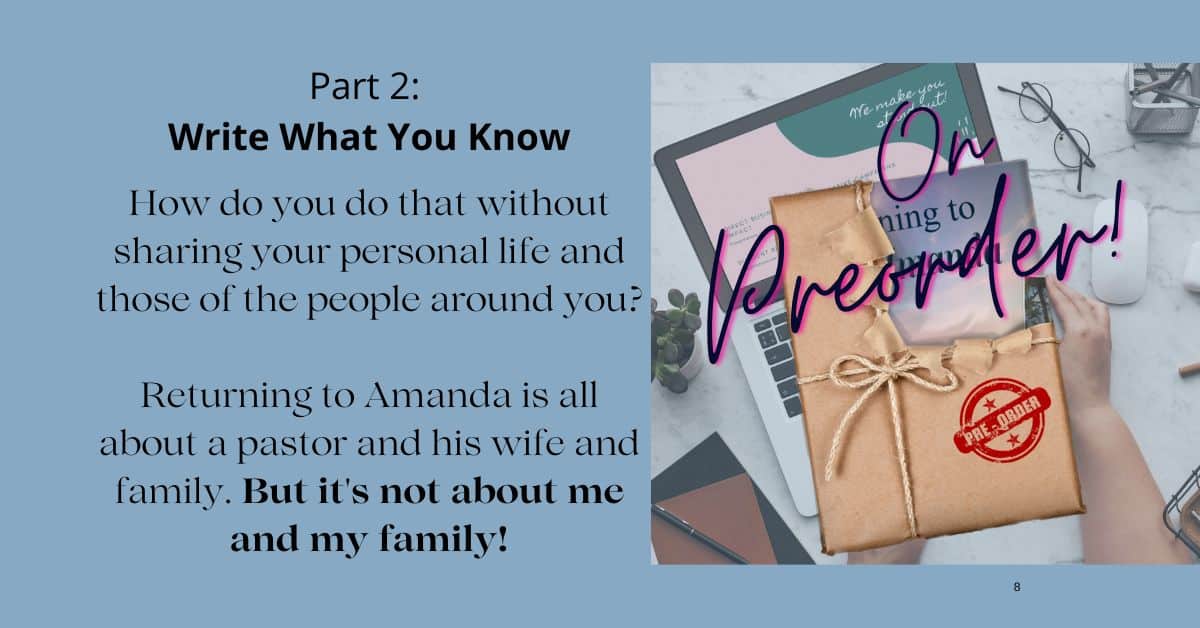 When I first started writing for publication, the general teaching was Write What You Know.

How Do You Write What You Know?

At that stage, I was recovering from a fight with aggressive cancer. I knew that story only too well. So I started writing devotional messages based on experiences and lessons based on what I had been through. Many of my devotions were published, and I had a number of articles published in print magazines and online sites, as well as in anthologies. Ultimately, those first meditations led to my first non-fiction book, Strength Renewed ~ Meditations for Your Journey through Breast Cancer published by Revell-Baker.

Deep down, I had a desire to write fiction, but what did I know that would make an interesting novel? I was an RN, so I had plenty nursing stories to tell, but novel material? I wasn’t sure. My other life was that of being the wife of a Presbyterian minister. That life I knew well. The ups and downs of supporting a pastor, the challenges of bringing up kids in the goldfish bowl of a ministry life without losing my own identity.

One day, I set out on the journey provisionally called Hidden Agenda. I told the story of a pastor’s wife with several children, and a husband that was too wrapped up in his ministry to support his wife and kids the way they needed. I decided she would have her own hidden agenda and not be interested in becoming involved in the church work, to the annoyance of her husband and the horror of a congregation that had their own not-so-hidden agenda for their pastor’s wife.

DISCLAIMER: This was not our family! I have an extremely supportive husband and was very involved in the church work from a musical point of view and as a Sunday School teacher among the youngsters. Our three kids also became very much a part of the church firstly as children, and as they grew up, took their own place in the leadership.

So it was not meant to be a story involving our lives ~ but being a pastor’s wife was a role I knew. I could honestly say I was obeying the maxim Write What You Know!

I knew I needed a main character, aka the protagonist, and that obviously had to be the minister’s wife. Then I needed an antagonist—the person who would oppose the protagonist in her goal. I created a character who would fit the bill, and enjoyed getting to know the crusty, interfering old lady. But as you’ll read in my next post, while she turned out to be a real pest and the source of much unhappiness, she turned out not to be the antagonist.  More on that in a later post.

I went through many exercises that helped me draw up a full list of characters. Tackling numerous magazines, I searched for pictures that made me think of those people. I drew up a large wall chart that showed photos of all my characters, and underneath listed all their attributes, both good and bad. It was fun, and in the process I learned a great deal about them, and stored up good material that served me well when I started writing. They became so real to me that I found there were times when I wanted them to behave in a certain way that they rebelled as that wasn’t part of their nature.

My one weak character was my protagonist. I couldn’t seem to create a protagonist who was a minister’s wife worthy of reading about, especially as she mustn’t resemble me!

Last week, I mentioned how my main character, Mandy, suddenly grew a backbone and took an action I would never have taken, nor could I condone it! She and her husband had a blazing row, and she flounced from the bedroom. I could have coped with that. But the next day, she ran away. That was definitely not in my script! What script? The one I hadn’t written. I was a panster, remember?

I really didn’t know what to do next, so I had no option but to follow her lead, and to my amazement, lead she did. She took the story in an entirely different direction to my previous attempts and I loved the way the book ended. Add to that the global pandemic that was fast approaching South Africa, which I definitely hadn’t factored into my original narrative, and I had a story that was going somewhere! But I needed some sort of plan or this book would go on forever.

I finally sat down and drew up some sort of plan taking the story from where Mandy had now taken it, to some sort of conclusion that I could live with. Then I went back to SOTP writing (by the seat of my pants!) You see, I had finally realised I am not a panster at all. But nor am I a planner (one who plans out every step along the way.) I am a planster . . . I need a plan so I know where I’m going. Then I need to allow my characters to take over as I try to follow the plan.

Next week, I have a surprise for you. I’m going to introduce you to Mandy, my main character, in the form of an interview. I’ll get her to tell you a bit of what made her tick—and what made her ticked off! What prompted her to run away, and what were some of the ramifications of that action. As the author of the novel, I look forward to seeing what she has to tell me.

If you have any question you’d like to ask Mandy yourself, please type it in the comment section, and I’ll ask her to respond to you next week.

4 comments on “Write What You Know”