I hadn’t been writing for long when I read these words by Stephen King. I didn’t intend writing a thriller, so I pushed those thoughts to one side. 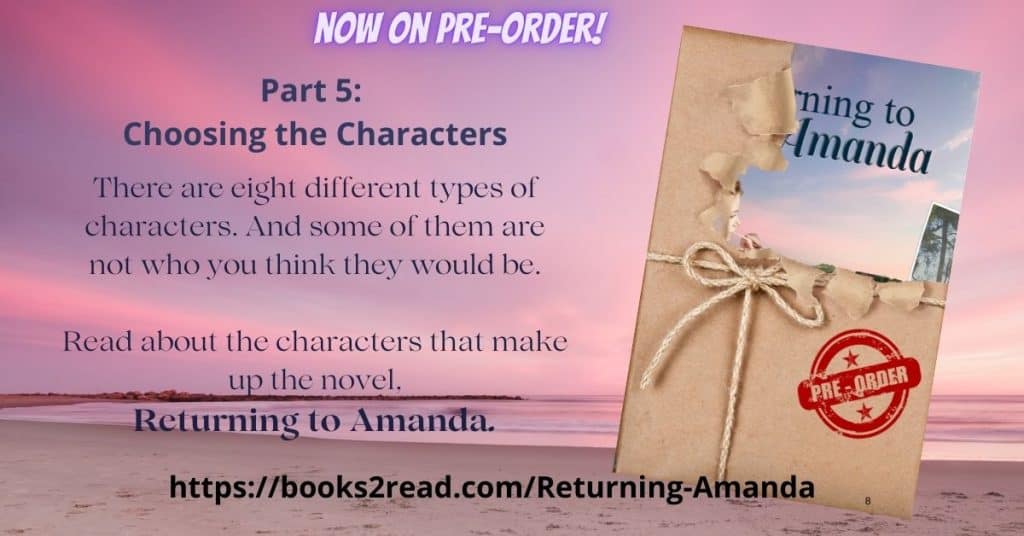 When I decided to write that first novel, twenty years ago, I followed the teaching, write what you know and chose a pastor and his wife and family to be the center of my story. However, lest anyone think I was basing the story on my own family, I made my main character to be an artist (which I most definitely am not!) I deliberately gave them four children, whereas I have three. So the Douglas family had Holly, a precocious thirteen-year-old, a pair of ten-year-old twins, Sue and Ronny, and a cute little two-year-old who was in the process of being hopelessly spoiled.

And so the family remained for a whole twenty years, never getting any older, but with me getting to know them better.

Killing Off a Darling

When I sat down to write this final story, I knew I had way too many scenes and situations and I had to do some drastic cuts. One that really saddened me was the realization that I needed to cut down on my characters. And the one that really contributed little to the story was Bobby, my two-year-old. He was just there because he was cute! And to give me a fourth child in the family.

And so I had to remove him from the story. I didn’t exactly kill him. I couldn’t do that. (So now you know why I will never become a thriller writer!) Bobby was just dropped from the cast. He ceased to exist.  How sad. Of course, there’s no guarantee he won’t one day turn up in another story, because … he really is cute!

Introducing the cast of Returning to Amanda

In introducing you to the cast of this novel, I’m going to make use of Jerry Jenkin’s useful list of the eight different types of characters needed to make up a well-balanced novel.

The protagonist is the hero of the story. He or she is the person the readers most identify with. She, as in Amanda’s story, needs to be the center of attention, drive the plot, and change and grow as the story progresses. She must not be perfect, and Amanda, aka Mandy, certainly isn’t. But by the end of the story she needs to become a different and stronger person.

Every story needs a villain, aka the antagonist. He (or she) opposes and undermines the main character. I went through several of my characters, trying them out in the role of the antagonist.  However, once the story started to evolve, it became apparent to me. My antagonist was none other than Owen, Mandy’s husband. How about that? Fancy being married to your antagonist? He needs to have a realistic backstory, and he actually causes the protagonist to grow. In Jerry’s words:

The antagonist in a story must 'force the protagonist to make difficult choices' ~ Jerry Jenkins. Click To Tweet

My protagonist needed a friend, or as is often called, a confidante. Into the mix came Carey, a younger lady who blogs for a living. Originally, she was just a friend of the pastor’s wife. That is until Mandy unexpectedly runs away. Carey knew nothing about her plans, but she sure ends up stepping up to the plate to help the struggling pastor and his family.  (And incidentally, she is the protagonist in the follow-up novel to Returning to Amanda.)

This character is usually a troublemaker who instigates trouble for the key character. And boy, did Mrs. Cartwright fit that bill? She lives across the road from the Douglas’s home, and spends long hours sitting in her bay window watching out of her binoculars. She claims to be a bird watcher. But when there are no trees outside her home? And the pastor’s home is directly in her sight? The old lady becomes a prickly thorn in Mandy’s side as she eagerly passes on her own interpretation of what goes on over the road.

I struggled to identify the character who would be a foil in Returning to Amanda, until I recognized the traits shown by Owen’s secretary, Evelyn. Initially, I had her earmarked as an antagonist, but she is not the enemy. She just has a very different set of values and approach to life to Mandy and doesn’t hesitate to show attention to Mandy’s failings. Perhaps she’s trying to disguise her own failings? We’ll see when it comes to Book 3 in the series. At this stage, that is likely to be Evelyn’s story.

The position of sidekick is often a friend who supports the protagonist, offering advice and adding depth to the story. This role is well played by a certain lady who needs to remain a mystery to you until you read the book.  You’ll recognize her when you reach her during your reading!

These are the people who are essential to the story, but not an integral part. I don’t know that the thirteen-year-old Holly, or the irrepressible ten-year-old twins, Sue and Ronny, would see themselves in that role, but they are certainly key members of the cast. There are also a number of minor characters who play an important role.

Oh yes, this category shows up in the story, but once again, I cannot disclose it at this point or it will ruin the story for you.

If you’d like to know more about the story, the e-book is currently available for pre-order on Amazon at a discount price. You can read the blurb (back-cover story) at that link before ordering. And by the way, you can always cancel your pre-order if you change your mind.

If you are an author and want help in choosing your characters,
the post I’ve referred to by Jerry Jenkins can be found here.

Yes! I want to order now!

Other blog posts about Returning to Amanda are as follows:

A Debut Novel at My Age?
Write What You Know
Character Interview: Mandy Douglas
The Cover Story

16 comments on “The Characters in Returning to Amanda”