Most of us know about Miriam, the little girl who watched over her three-month-old brother as he sails in a basket boat on the crocodile-infested River Nile.

We’ve probably also heard the story of the Hebrew boy who grew up in an Egyptian palace. But during that time, what was happening to his sister, Miriam?

takes an in-depth look at young Miriam when she is confronted with the imminent birth of another sibling. What would Miriam’s parents do if their new baby was a boy?  Pharaoh had ordered the death of all newborn Hebrew boys.

What would have happened if Miriam’s parents had obeyed Pharaoh and destroyed their new baby?

What would have happened if Miriam's parents had obeyed Pharaoh and destroyed their new baby? Click To Tweet

Shirley would like you to get to know this brave woman of faith, as she steps out of the shadow of her baby brother.

The book is written in creative non-fiction, a genre that deals with facts written in story format. It comprises 50 short stories telling the Old Testament story of a little girl who had to grow up very quickly. It is not a work of fiction, but in order to bring the story alive, there are some embellishments to help you relate to the story.

At the end of each chapter, there are a few questions or comments to help you reflect upon what you have read and how it may apply to you.

1. Read it through as a story, pausing at the reflections as you go.

2. Or read it with friends or an established Bible Study group.

The Scripture readings are very short, sometimes only a section of a verse, or even the same reading for consecutive chapters.

Feel free to read the passage surrounding the quoted verse although these will not necessarily be relevant to the chapter you are reading. The reflections often suggest further readings in order to give you some background to the passage. I pray you will enjoy getting to know the young Miriam as she steps out of the shadow of Moses, her beloved (at times) baby brother.

Miriam looked up as her mother, Jochebed, slipped into the room. Late to break the fast, again. Eyes red-rimmed, again. Ten-year-old Miriam was old enough to recognize tension, yet too young to figure out why. Her father, Amram, had left for work before she awoke. He would probably come home after Miriam had prepared the evening meal and lulled her younger brother to sleep.

“How would they cope if I’d been born a boy?” she often said to Aaron. At the tender age of three, the little boy would chuckle and nod his head at anything his big sister said.

Miriam remembered Aaron’s birth. She was 7 at the time and had looked forward with excitement to his arrival. At last, she would have a baby brother or sister. All her friends already had younger brothers or sisters. The baby could be a boy or girl, as long as she was allowed to play with it.

Great was the celebration when the baby arrived. Miriam looked at the scrawny red infant and felt totally let down. He wasn’t going to be any good for her. The neighbors came to visit and congratulated the parents. They mostly ignored Miriam, except for the occasional comment, “You are blessed to have a baby brother. Praise God it’s a boy!”

She got the message. Until then, she had felt loved by her parents. After Aaron arrived, she knew the truth. When she was born, her mother and father would have been disappointed. Parents always hoped for a boy to keep the family name going. 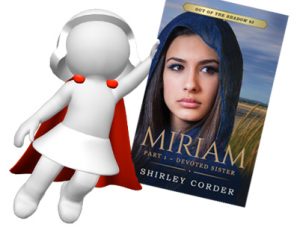 If you enjoy it, I would love you to post a review on Amazon and anywhere else you know of. Thank you.

Get your copy of the e-reader here:

If you enjoy it, I would love you to post a review on Amazon or any other place that sells the book. Thank you.

N.B. The top image is the new cover. The second one is the previous version. I need to hear from you. Which do you prefer?

CHOSE A COVER: Top image is the new cover. The second one is the old version. I need to hear from you. Which do you prefer? Click To Tweet

Eve – Mother of All is the first in a growing series of books based on women in the Bible that lived under the shadow of some other person, location, or event.

Other books by Shirley:

Would you like to be kept in touch through my newsletter? I promise never to share your email with anyone else, and you can unsubscribe at any time. I won’t fill your inbox with spam, and you will only hear from me normally once a month unless I have extra-breaking news in which case it will just be a “postcard” to update you.