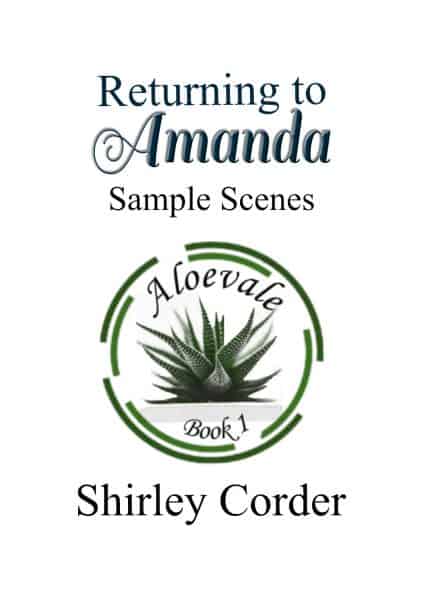 Mandy Douglas clicked her safety belt closed and stared out the window of the plane. Her throat started to close in panic. How could she just leave her children? What sort of mother was she anyway? And Owen? Sure, last night’s blow-up had brought things to a head, but what sort of wife ups and leaves her husband at the first sign of problems? Okay, maybe not the first sign. But still. Shouldn’t she have tried harder to sort things out?

She glanced at her watch. If she got off the plane now and raced back to the airport, she could call another Uber and be home in time for supper. She often gave thanks to the Lord for positioning the manse on the corner of two streets, and for providing them with a small side gate out of sight of her interfering neighbor across the road. At least Mrs. Cartwright wouldn’t have been able to warn Owen that his wife had caught an Uber away from home. Of course, if she went back now, she’d have to come up with a story to explain her initial absence, but the family need never know how close they had come to losing their wife and mother.

They haven’t lost you. You’re coming back.

“Oh, be quiet!” she muttered at the voice that had plagued her in recent months, as she fumbled to release her seatbelt buckle.

She craned her neck to see if passengers were still boarding. People milled around, stowing their luggage in the overhead spaces and moving into their seats. Two uniformed flight attendants made their way in her direction, responding to queries, and helping an elderly lady stash her case above her seat. It looked as if they’d already closed the door. Would they still open it for her?

She would have to collect her case and jacket from the top rack and ask the attendant to let her off the plane. And how would she get her case from the hold? She felt a gentle lurch as the jet started to reverse away from the buildings. Away from her children—away from her husband.

She’d come to her senses—too late. Owen would be so mad. She sank back onto her seat and stared sightlessly out the window, her vision blurred with tears. Oh Lord, forgive me.

“Ma’am? Is your safety belt fastened?” The dark-haired stewardess had reached her seat. No, it’s not. I need to get off!

She swallowed and nodded as she clicked it tight. “Yes.” She lifted her hands to show the buckle, once again secure. “Thank you.”

What am I doing? Why didn’t I at least wait a couple more days? Maybe I could have still been making this trip but with Owen’s blessing.

That wouldn’t have happened, but still … How would Owen react when he read her note? What would he say to the kids?

What does it matter? You won’t be there to hear.

Start from here if you’ve come from an email

If nothing else came from this time away, she yearned to get rid of the voice that had caused more than one embarrassing moment. It was like an audible voice, yet no one else heard it. Was she going insane? She rubbed at her eyes with her sleeve, then leaned back and peered out the window. The plane stopped reversing. A small but sturdy push-back vehicle sped past her window, back toward the buildings. It really was too late.

At least she had an empty seat next to her. She wouldn’t have to make polite conversation and try to explain why she was taking this trip. Not that she understood herself.

“Ladies and gentlemen, welcome aboard flight …” the captain welcomed them and introduced himself and his team of assistants. The chief steward then welcomed them on board and urged them to watch as the flight attendants, spaced at intervals along the aisle, walked them through the instructions of what to do in the event of an emergency.

Mandy turned to stare out the window as the plane taxied to the faraway runway. The heavy machine shuddered to a stop at the end of the long strip of concrete. The flight attendants moved to the back of the compartment to take their own seats in preparation for take-off. The engines started to rev, and Mandy felt a push into her seat as the plane started to roll forward.

We’d better not have an emergency. I haven’t taken in any of what they said. And I don’t have anyone next to me to help.

She tensed as the plane started to gather speed, racing down the runway at a ridiculous rate. The distant buildings flashed past, then a slight jolt and they were in the air. For better or worse, I’ve done it.

For richer or poorer, in sickness, in health … until we are parted by death or one of us runs away.

Startled, Mandy looked up into the puzzled eyes of a handsome young steward.

He smiled gently. “First flight, ma’am? It can be a bit nerve-wracking. Especially when you’re traveling alone.”

“No, not at all. Not my first flight.” Time to change the subject. She noticed his trolley and realized the poor man was just trying to offer her something to drink.

Just over an hour from takeoff, the plane’s warning light flashed on the bulkhead in front. Not long, and they would be on the ground. Mandy packed away her unopened book. She drew a deep breath. It wouldn’t be long, and she’d see her mother for the first time since she had visited the family when they lived in Riverston, their previous congregation. Her mother had last seen Holly when she was a sweet, compliant big sister to the twins. She screwed up her nose as she did a quick calculation. They’d been in Aloevale for about three years. And it must have been at least two years before that when her mother had last seen the children. They were about to start school at that point, so they must have been about six. And they’d just passed their tenth birthday.

In the distance she noticed buildings of Durban, the capital of KwaZulu-Natal, otherwise called KZN. Tears started to form again. How had she lost contact with her mother? All because she and her mother had fought without end when she spent two weeks with them in Riverston. They didn’t agree about anything. Their arguing had started to upset the children and annoyed Owen intensely. By the time her mother had gone home, they were all relieved. Owen had announced that she was no longer welcome in their home.

Each time the children had a birthday, and every Christmas, Mandy longed for her mother. Couldn’t they learn to get on if they tried? But whenever she brought up the subject with Owen, he remained adamant. Her mother was not welcome. When they decided to move to Aloevale, unbeknown to Owen, she’d tried to phone her mother. But the calls went unanswered. When she contacted the phone company, she learned the number had been disconnected.

The plane dropped further, flying over houses that resembled a toy village, with miniature cars speeding down tiny roads.

Mandy leaned forward and lifted her laptop onto her lap, then refastened her safety belt. As the plane moved closer to the ground, she settled back to watch and continued to reminisce. Her stomach knotted. How have I allowed things to reach this stage?

She had wondered if her mother had died, and why no one would have contacted her. When she tried to speak to Owen, he told her to accept the situation and make an effort to move forward. He didn’t know where his own mother was, and he pointed out that he didn’t make a fuss about it. He just presumed her to be dead, like his father.

He had seemed so heartless, and yet Mandy recognized it as his way of avoiding the grief associated with losing a parent. Trouble was, she couldn’t handle it that way. She needed to grieve. Yet how could she? Maybe, just maybe, her mother was still alive somewhere.

Then came last week’s letter, from a friend of her mother, a letter in an eye-catching pink envelope that had prompted her to take this drastic step. Her mother was still alive. And she needed her daughter. Mandy tried to discuss the letter with Owen. Repeatedly. But his work always came first.

The plane dropped lower, and the airport building appeared in the distance. A crackle sounded from the overhead speakers. “This is your captain speaking. We are about to land at the King Shaka International Airport in Durban. The temperature on the ground is twenty-seven degrees centigrade with no wind, a pleasant warm evening for you to enjoy. Thank you for traveling South African Airways. We trust you have enjoyed the flight. Please ensure you take all your carry-on luggage with you when you leave the aircraft.”

Mandy braced herself as the plane wheels bounced on the tarmac. A high screech echoed through the cabin as the pilot applied the brakes. And then they were rolling along at speed, past other parked airplanes and drawing closer to the buildings. Closer to her mother.

She wondered again whether Owen would try to find her. Or would he just wait for her to run home with her tail between her legs? Well, that wouldn’t happen. She wasn’t going home until the time was right.

First, she needed to find herself. Not the woman Owen wanted. Not the pastor’s wife of Aloevale Community Church. The woman God created her to be.

The plane jolted to a stop, and people sprang to their feet. Overhead compartment doors dropped open, and passengers packed the aisle. Mandy undid her seatbelt and waited for an opportunity to take her place to exit the plane. She stretched to fetch her carry-on and jacket from the overhead compartment, grateful that she was tall enough to reach them, then followed the slow-moving queue of people.

After collecting her suitcase from the carousel, she commandeered a luggage cart and piled on her case, laptop, and jacket. She made her way into the arrivals lounge. She scanned the crowds for a familiar figure.

Get the book, Returning to Amanda, to find out. Available in Paperback or eBook.

If you have read the book, I’d love you to leave a review on Amazon and/or Goodreads.

Previous Posts about Returning to Amanda