This entry is part 1 of the series God in Africa

NOTE: This is NOT the cover! Cover Reveal coming soon on Facebook.

How many are your works, LORD! In wisdom you made them all; the earth is full of your creatures.

“Africa is more a feeling than anything else. Once you’ve gone—and you get the feeling—you understand . . . In short, it’s a life-changing place to visit. It changes you, for the better[1]“

From its immense grasslands to its modern cities teeming with people, Africa is a continent of extremes. With its breathtaking landscapes of mountains and valleys, deserts and forests, mighty seas, beautiful beaches, and dense jungles, it is truly a magical and exciting land. And God is in this land. END_OF_DOCUMENT_TOKEN_TO_BE_REPLACED

This entry is part 2 of the series God in Africa

WHAT DO THINK OF AFRICA? 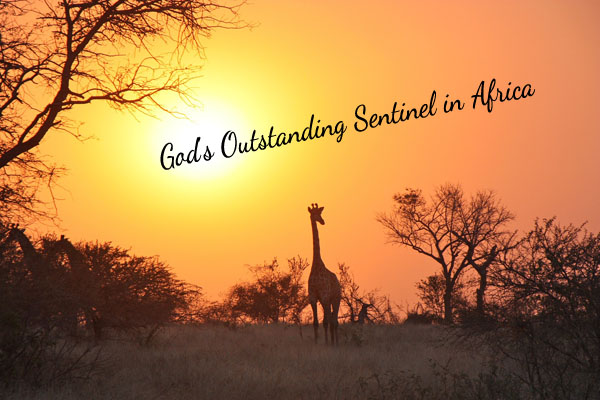 When you think of the land of Africa, do you think of the fantastic wild animals? Or the beautiful mountains and floral kingdoms? How about the cultures? The strange habits of some tribes? Did you know there are over 3,000 different ethnic groups in the continent, who speak in more than 2,100 different languages. It just doesn’t seem possible. END_OF_DOCUMENT_TOKEN_TO_BE_REPLACED

This entry is part 3 of the series God in Africa

TEN DAYS BEFORE THE BOOK LAUNCH OF GOD IN AFRICA

With the book launch of God in Africa around the corner, I went to visit my brother in East London (about five hours along the beautiful coastline of South Africa) for a few days to celebrate his 60th birthday.

There is a small step down from the bedroom where we were sleeping to a landing with the bathroom on the left and a short steep staircase on the right. One night, I made my way to the bathroom in the early hours of the morning and, being a considerate kinda gal, I used the light on my cellphone so I wouldn’t disturb my husband.

As I took the step down, the light went out. I stumbled, fell onto the balustrade, and started a headlong bounce down the stairs towards the wall. Praise the Lord, He caught me! I managed to hook the rail with my left arm and took my weight on my right arm (on the carpeted step.)

After an ungainly slither (or something) back up to the landing, I took stock. Nothing broken. Just a flap of skin ripped from my arm in what turned out to be a carpet-burn. Cutting a long story short, and despite prompt if irregular, first aid, that wound duly went septic. Hence the bandage.

Then came the bites. We had a beautiful day visiting part of The Wild Coast, an area Rob and I had never been to.

Only after we were home in PE, I discovered an itchy bite which when I investigated was actually huge, inflamed, and had a black center. Not nice. It looked like a tick bite, and I had a book launch a week away! I made an appointment to see my doctor the next day. By that time two more had developed.

Again, to make an ugly, long story short, despite huge doses of penicillin all three went septic and nasty and so I had dressings on them all. I’m currently on my second course of penicillin and gradually starting to heal.

BOOK LAUNCH OF  GOD IN AFRICA

Despite satan’s best efforts to thwart it, not to mention all the bandages (mostly hidden from view) the launch of God in Africa went off fabulously. I had a great team of folk helping, and it was really a lovely afternoon. I sold nearly eighty books and I’ve sold one or two every day since.  Here is an overview of how the afternoon worked out.

THE PROGRAM FOR THE AFTERNOON

Click here to see the program for the afternoon, and you should be able to work out what was what and who was who.

All in all a super time, and a successful book launch – despite all the bandages and bites!

Read more about God in Africa here. Both paperback and ebook are available on Amazon and I have paperbacks to sell for those in Africa.

Right now, the ebook is on special – only $0.99 in the US (check your own currency) but the price goes up early next week. So don’t delay!

Get your copy here.

Much more in the next post, but this is a heads-up. During the days from October 25-28 a group of eleven authors living in, or connected to, Africa will be going on an Africa Book Safari. Want to learn more? Watch the video and come along with us. We already have over 300 people signed up to join us. Lots of giveaways, special offers, a vast selection of genres.

I’m telling you—it is going to be so exciting!

What excites you most about Africa? Or about this book?