Question of the Week

This week, Welcome to My World asks the question: “If there were no limitations, which country would you most like to visit?” 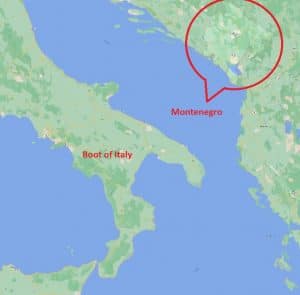 No question for me. I would love, love, love, to visit Montenegro. Hands up if you don’t know where that is! When I first heard the name, I had no clue.

And I don’t think I’ve ever mentioned it in conversation to anyone without being asked, “Where is that?”

So let me start off with a brief geography lesson for you. One of the first countries I learned to identify was Italy. My mother taught me that “Great big Italy kicked poor little Sicily into the middle of the Mediterranean Sea”!

In the process, I learned to find Italy, Sicily, and the Mediterranean Sea.

Little did I know at that tender age I would one day learn about a small, rugged country a third the size of Switzerland, called Montenegro which lies opposite the boot of Italy.

Why do I want to visit there? Because it is the current home of my daughter and son-in-law, who have shared photographs of some of its incredible beauty over the past years.

Sadly, this is one goal that I am not likely to ever achieve for a host of reasons. That’s a pity, as my life is governed by goals, most of which I achieve. But yesterday, I decided to move a set of goalposts.

In a previous post, I shared about my WIP (Work in Progress) called Finding Amanda.

I signed up to write it during Camp Nano. The goal of Camp Nano is to set a writing goal and see if you can reach it. My goal was two-fold. You can say I had two sets of goalposts to reach!

I passed the 50,000 word goalposts about halfway through the month and felt confident I would finish the book. However, my characters had other ideas. (See here for When the Characters Call the Shots.) It’s been a fun write, and I’m really enjoying the story. I’m hoping they will allow me to wrap up the story in the next week or two.

One down — one to go 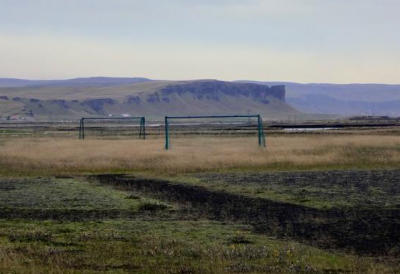 Yesterday, I had to take a realistic look at my goalposts. The second set was just too far away.

It is never easy to move goalposts - but sometimes it is necessary, and can bring satisfaction. Click To Tweet

A year or two ago, I would have pulled a couple of all-nighters, but I have grown up (or got older – whichever you prefer!) I now put enjoyment ahead of achievement. Yes, I want to achieve. But I also want to enjoy the journey. So I’ve moved the goalposts.

I haven’t actually set a word count this time, as I have no idea what my characters still have up their computerized sleeves. But my current goal is to continue to type at least 2,000 words every day with the exception of Sundays. If I run short some days, I have to make it up the next day! That way, I can be certain I will finish the book during May; hopefully, sooner rather than later.

Although I only passed one set of goalposts in my double venture, I feel pleased—pleased that I have finally learned to move goalposts instead of breaking my neck trying to reach the near-impossible.

So . . . watch this space. Any week now, I’ll be entering the editing phase, which, unlike many writers, I love. I actually prefer the rewriting stage to the initial writing.

How close are your goalposts?

What is your goal for the foreseeable future? How close are you to reaching it? Share in the comment section below.

4 comments on “Have you Ever had to Move your Goalposts?”