13th March 2009: From Shipwrecks to Fishwrecks 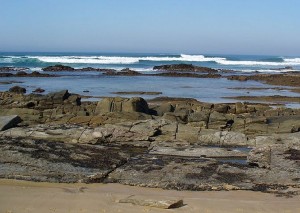 Today we walked with a group of about 25 retirees along the Sacramento Trail outside of Port Elizabeth. This popular  8 km (5.12 miles) round trip coastal walk traverses the Sardinia Bay Nature Reserve.
The view offers stunning seascapes and landscapes. Depending on the season, there are often remarkable displays of dune vegetation and wildflowers.

Offshore, the wrecks of many ships are to be found. The best known is The Sacramento, a Portuguese galleon that foundered on the treacherous reefs on June 30th 1647. 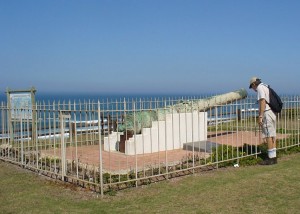 The Sacramento Trail follows the route walked by survivors of the shipwreck. The route continues past the Sacramento monument near the far end of the sandy bay, appropriately named Cannon Bay.

Nearby lie the remains of a mill that used to crush seashells to produce lime. At the small community of Schoenmakerskop a bronze cannon points towards the wreck site. 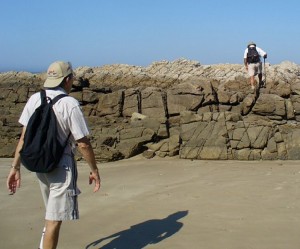 At times the path wound through quite dense bush, then emerged to give breathtaking views of the sea below. Once down on the beach, there were a few times we had to clamber over rocks.

We enjoyed a tea-break next to an inlet and a few of our braver members took a quick dip in the icy water. 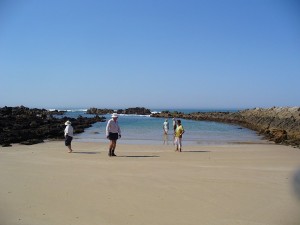 As we neared the end of our walk, we heard of a recently beached whale shark not far from where we had parked our cars. 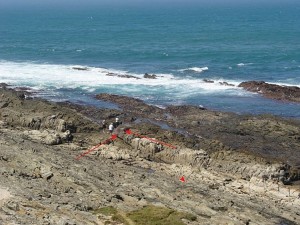 We were hot and tired, yet we hadn’t even heard of a whale shark, never mind seen one. So my husband and I drove a short distance along the road until we came to a view site where people often park to watch dolphins and whales out at sea. Far below, we could make out a huge shape amongst the rocks. (See the small red arrows.)>>>

Gathering our depleted energy resources, we made our way down dozens of steps to the beach below. We clambered over the rocks until we came to the gigantic creature.

We later learned that this slow moving filter feeding shark is the largest fish species in existence and is in danger of extinction. It can grow up to 14 metres (46 feet) in length and can weigh up to 1,500 kilograms (1.5 metric tons). This distinctively-marked shark is found in tropical and warm oceans and lives in the open sea. It can live for up to 100 years.The species is believed to have originated about 60 million years ago. This one certainly resembled some sort of prehistoric creature, not remotely like a whale or a shark as we see them in our aquariums. 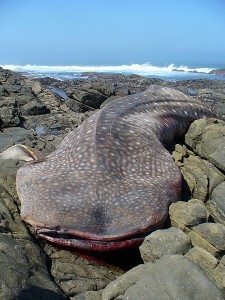 Drips of congealed scarlet blood hung from its cavernous mouth where it had bashed into the rocks. Evidently, the mouths of these sharks can be up to 1.5 metres (4.9 ft) wide and can contain between 300 and 350 rows of tiny teeth. We didn’t try to count the teeth, but the mouth was certainly somewhere around 1.5 metres in width.

I didn’t stand long at the head, as the gentle breeze wafted the stench in my direction. Lying in the baking midday sun it will soon begin to rot and become a dreadful problem to the area.

Five large gills splayed open along its uppermost side.Two tiny eyes stared vacantly from the sides of his massive head. Its gargantuan body twisted around an outcrop of boulders.

The end of its massive forked tail was covered in blood where it had obviously been thrashed against the rocks. The nearby boulders showed further red stains from the great creature’s gruesome death throes. 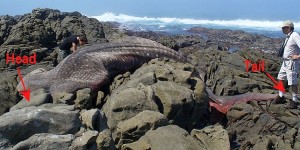 When we returned home I learned that the “checkerboard” of pale yellow spots and stripes on its body is unique to each whale shark. As a result, the markings can be used to identify each animal and so help to calculate an accurate population count.

Unlike other fish, the whale shark uses its entire body for swimming, resulting in an average speed of only around 5 kilometre-per-hour (3.1 mph).

I cannot begin to imagine the size or force of the waves that landed this creature so far from the water. Nor do I have any idea how they are going to remove the carcass. I’m glad it’s not my problem.