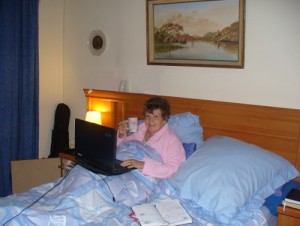 Over the next weeks I basked in the excitement. Rise and Soar was really going to be published. At last, I felt like a “real author”. I wrote at my desktop. I wrote on the verandah. I wrote at the swimming pool. And I wrote in bed.

I had already contributed to seven or eight books by that stage (now ten) and had a couple of small e-books up on Amazon and two other freebies on my websites.I had also published hundreds of articles and devotions internationally. But this was a full-length book, and God had done the almost impossible. He had got this book into the hands of the fabulous Revell Books, a division of the well-known Baker Publishing group. My theme song came to mind yet again: “God will make a way, where there seems to be no way!”

Revell began over 130 years ago when D. L. Moody and his brother-in-law Fleming H. Revell saw the need for practical books that would help bring the Christian faith to everyday life. In the early 1990s, Revell was bought by the Baker Publishing Group, whose mission statement is “to publish high-quality writings that represent historic Christianity and serve the diverse interests and concerns of evangelical readers.” I found it thrilling to read the history of Revell and Baker, and to realise my book would one day appear in their catalogues.

I had several months in which to write the book, which of course was longer than I needed as the book was already written! However, I enjoyed the process of going through it, word by word, sentence by sentence, polishing it as much as I could. The original devotions had been edited by my online critique group, which included two Americans. I found a few duplicates in the Scriptures I had chosen, and changed a number of the anecdotes I had used as illustrations. I had plenty to choose from. Whatever can be said of the journey through cancer, it is not monotonous. You can never count on one day being the same as another.

In many ways, the re-write of the book was an emotional journey for me, as I re-lived all the events. My goal was to be as real as possible for my readers. I didn’t want to impress them with this phoney “saint” who conquered all that came her way. Rather, I wanted them to see a great God, who worked in the life of a very ordinary, often frightened woman, bringing her through situations which seemed impossible or hopeless at the time.

Once I was happy with the book, I asked four people to proof-read it and be as critical as possible. Only one of these was a professional writer. The others were readers, and two of them pastors. After all, the book was geared for readers, not writers.

I then did yet another edit, following any corrections they suggested. I knew I would never be 100% satisfied with the book. I must have done about 15 edits when I decided the time had come to STOP! I then sent it off to a professional editor in the States who had already agreed to do an edit for me. I felt this was especially important for me, with my non-American background.

What a delight when she returned the manuscript with some corrections and suggestions, and a reduced cost. She dropped the price she had quoted as, she said, “I had to do very little.”

Finally, the time had arrived to send my baby out into the big wide world. It was a few weeks until the due date, but I knew it was time for my eaglet to rise and soar into the blue cyber skies. I think that was the scariest moment of the entire journey for me. What if Vicki, the acquisition editor, took one look at the manuscript and said, “This is not what I’d hoped for.” Still, like all responsible parents, I’d done the best I could do. Now it was time for Rise and Soar to prove itself.