The year of Africa in the Corder Home!

As many of you are aware, we have just come to the end of an amazing virtual Africa Book Safari on Facebook.

For many years, my husband, Rob, and I have longed to go on an African Safari with a game drive which takes you off-road to see some of the animals close up in their natural habitat. But they are all SO expensive, and now that we’ve reached retirement we couldn’t see it ever happening.

However, it is 50 years this month since we entered full-time ministry when my husband was ordained as a Presbyterian minister. We wanted to celebrate it in some special way. What better way than to take a game drive into a game reserve? Especially after the recent publication of my book, God in Africa, and the conclusion of the very successful Africa Book Safari. (More about that tomorrow.)

A lot of happenings

After much research and establishing there was NO WAY we could ever afford to do this. Then I “happened” to mention it to a friend in my card-making group. She “happened” to know her neighbor had recently been on a safari—and it hadn’t ended them up financially destroyed! So we investigated. And yesterday, we “happened” to take ourselves off to the Kwantu Private Game Reserve, 95 kms from our home in Port Elizabeth for a celebratory game drive. (Don’t you just love these “God-happenings” in life?)

Words cannot adequately describe the amazing day. So I thought I would share with you some of the things we saw and participated in.

Five-star Luxury – with a game drive

The morning started in a magnificent five-star hotel, where we were treated to a fabulous “bonus” breakfast we hadn’t anticipated.

After some time to wander around the beautiful grounds, we set out on the game drive. Once we had clambered onto the high landrover, our guide introduced himself and explained that the animals were not afraid of the vehicle as they saw it as a single unit. However, if any arms waved out the vehicle, or passengers leaned out with their cameras, the animals would either take fright or draw close in a way we did not want to happen! Trust me. We all listened carefully!

Our guide and driver, Densely Chireru, turned out to be a Zimbabwean, born and brought up in a small rural town called Mazoe, in the same land where I grew up. He was a lovely guy, and so very well informed about life in the wild. He would stop the landrover and hop out to pick up a chunk of dung in his hand and show us how he knew what animal it was from and how near the animal could be.

It was amazing how bumpy the “roads” were and of course, it was far worse when we went offroad. I wear a “Be-fit watch” and I was fascinated to see by the time we got home, that I had done nearly 10,000 steps. Yet the furthest I walked the whole day was to and from the dining-room!

We saw buck (antelope) in many places, but they tended to be skittish and so difficult to get close. Thanks to Densely, I learned the names of all the breeds we spotted. 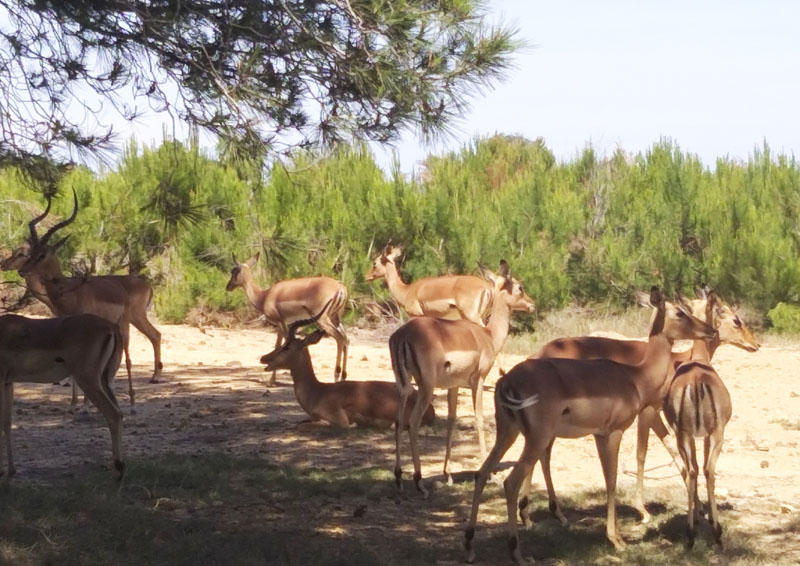 Impala hiding in the shade of a large tree 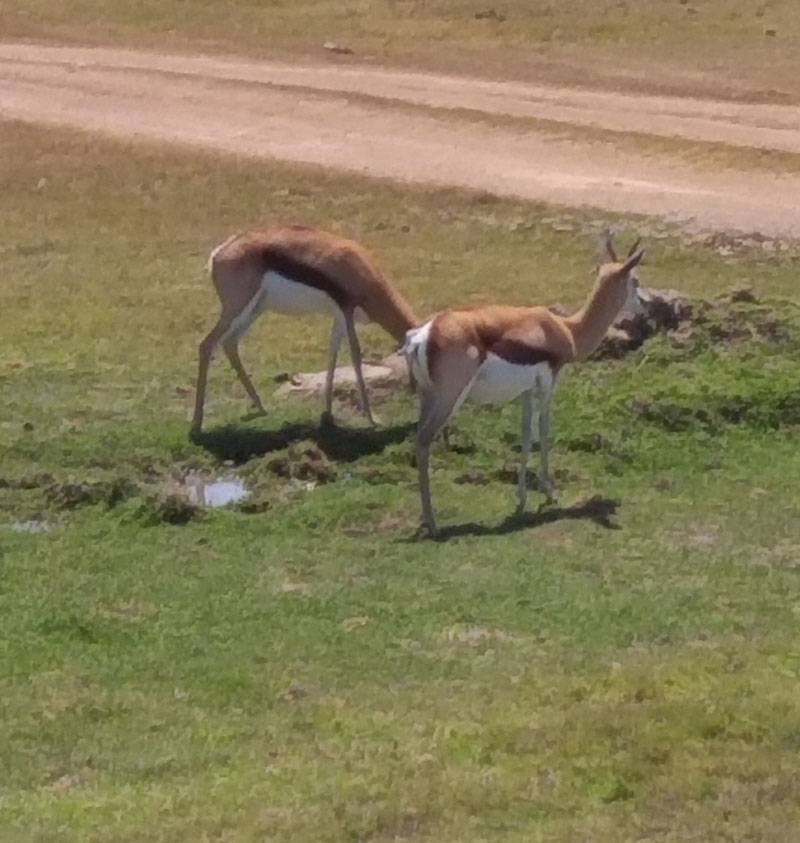 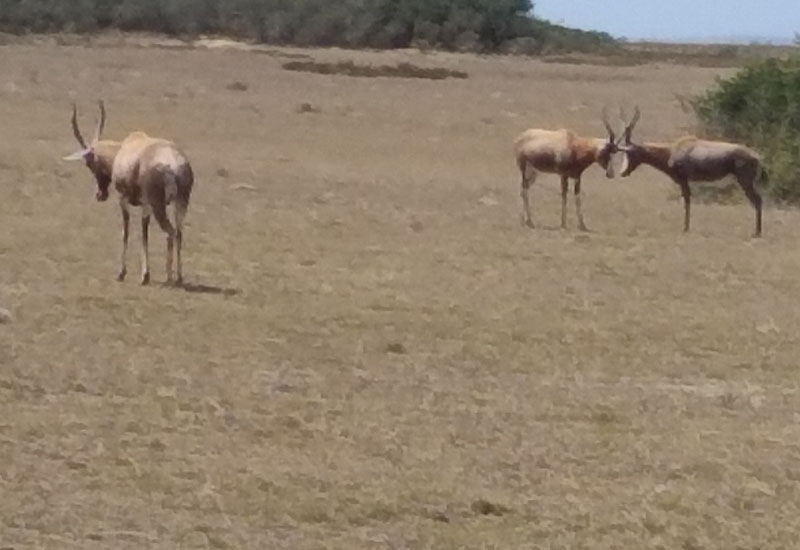 Blesbok, who hang their heads down to prevent maggots from entering their large nostrils!

It was thrilling to see some Wildebeest up close (known in other countries as the Gnu.) 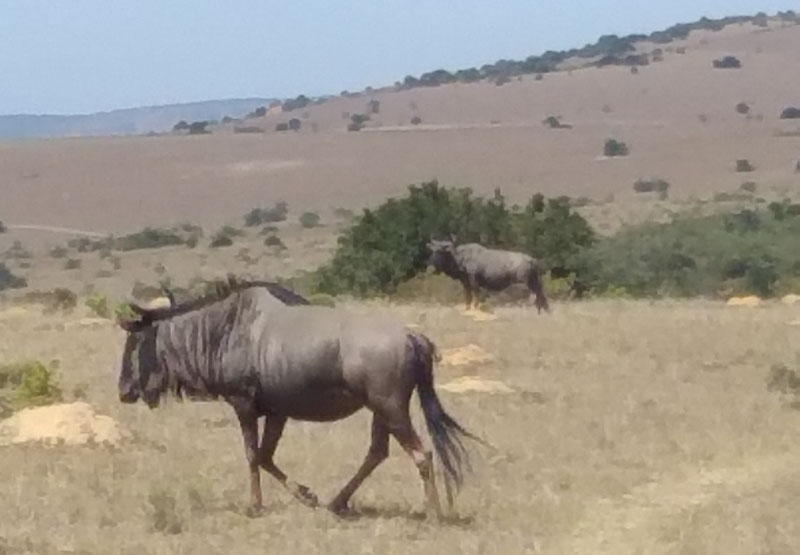 The Wildebeest, or Gnu, who wouldn’t post nicely for a photograph.

And we were amazed at the way termite mounds dotted all the open surfaces. Densely stopped periodically to explain what sort of termites had built these, which he could tell by the color of the mounds, showing what type of soil they had used. He also said that the mounds are known as Africa’s icebergs, as only 1/3 of each show above the ground! 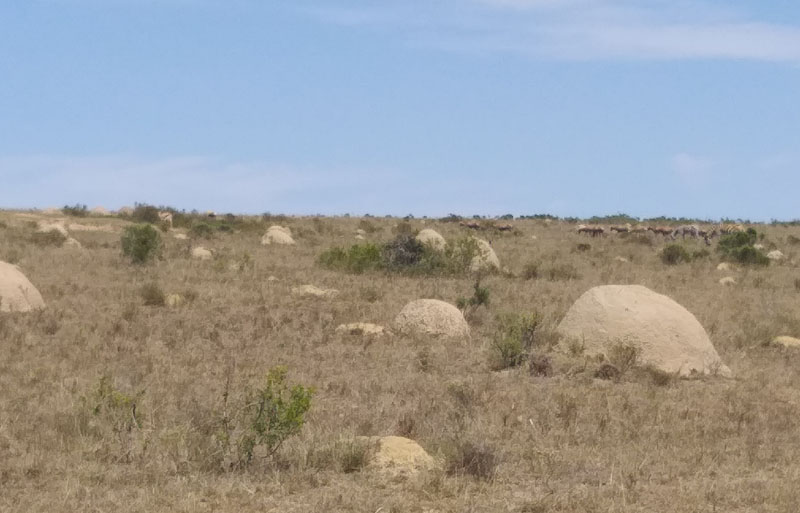 Termite mounds– These were some of the little ones.

And then we saw a number of these beauties, who were not at all camera-shy! 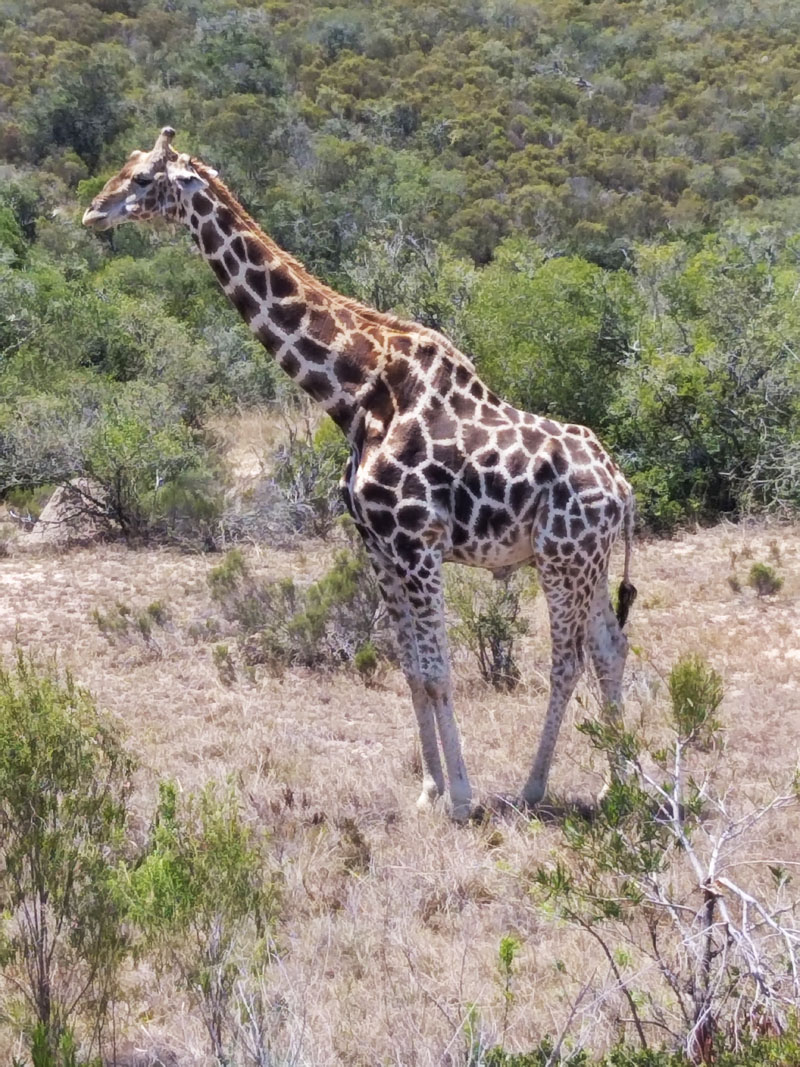 An 18 foot male giraffe taller and darker than his dainty (but still huge!) counterparts whom we’d already seen. 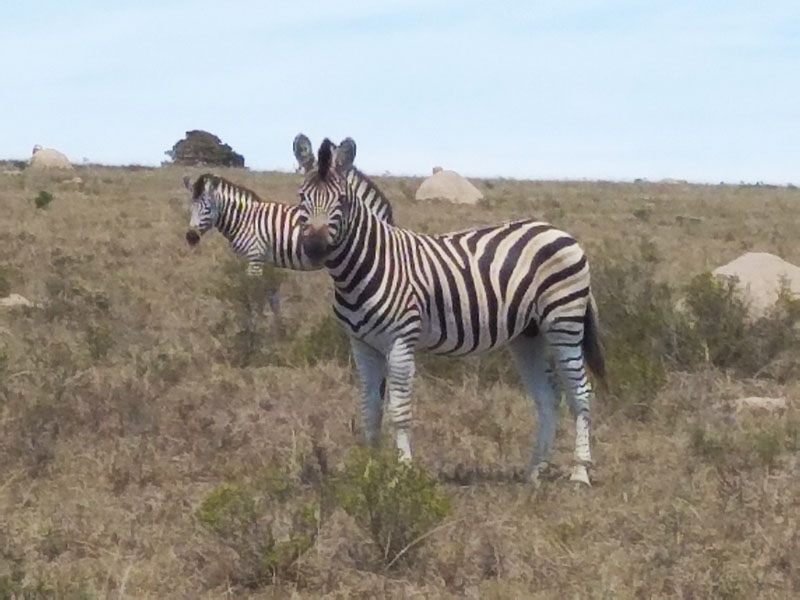 This Zebra stallion had a brood of females whom he was determined to protect at all cost!

Then we came across this family enjoying a siesta under the trees. Delsely told us that these lazy creatures sleep for 20 hours a day! The females do most of the hard work, catching food, etc, while this King of the Jungle protects his family . . . and sleeps! 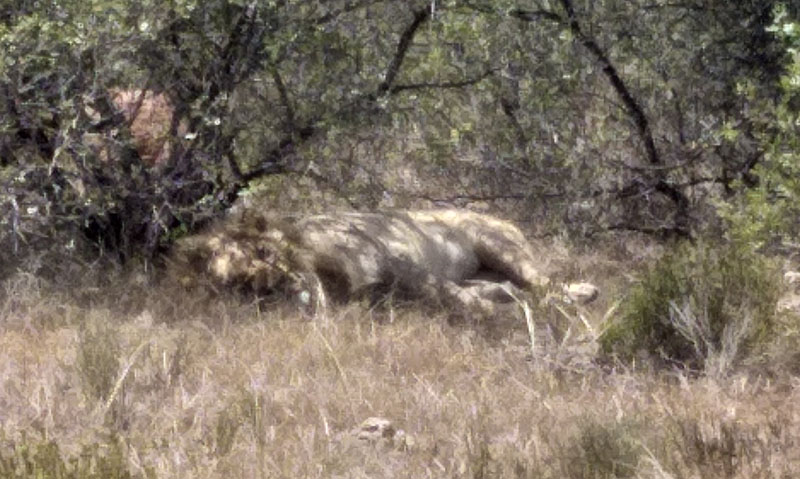 Difficult to photograph as they were so well camouflaged. The King of the Beasts. 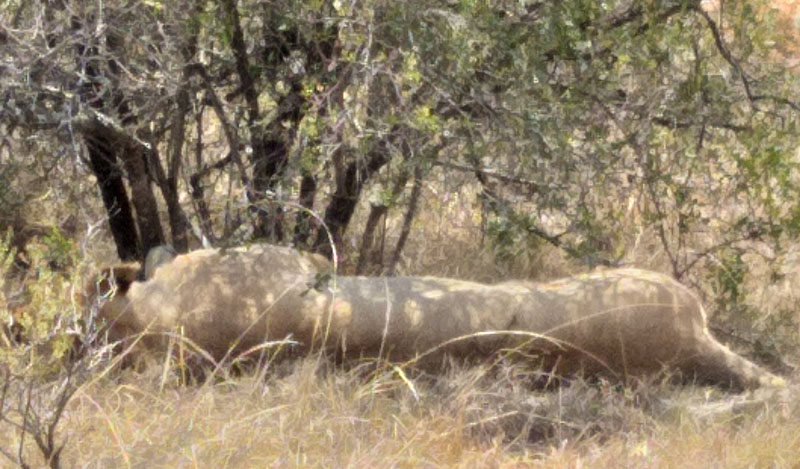 and one of his two wives. We had to remain in our “comfort zone” or it might have ceased to be comfortable for us!

When this male rhino saw us coming, he got to his feet in a well-mannered way, while his wife stood by shyly in the shade. What magnificent beasts, and how sad that they are frequent victims of poachers in this area as well as all over South Africa. Men are their biggest predators, often not bothering to even kill them, but just hacking off their horns and leaving them to bleed to death. If only these poachers would take a game drive and see these magnificent creatures in the wild, maybe they’d lose their lust for wealth and power. 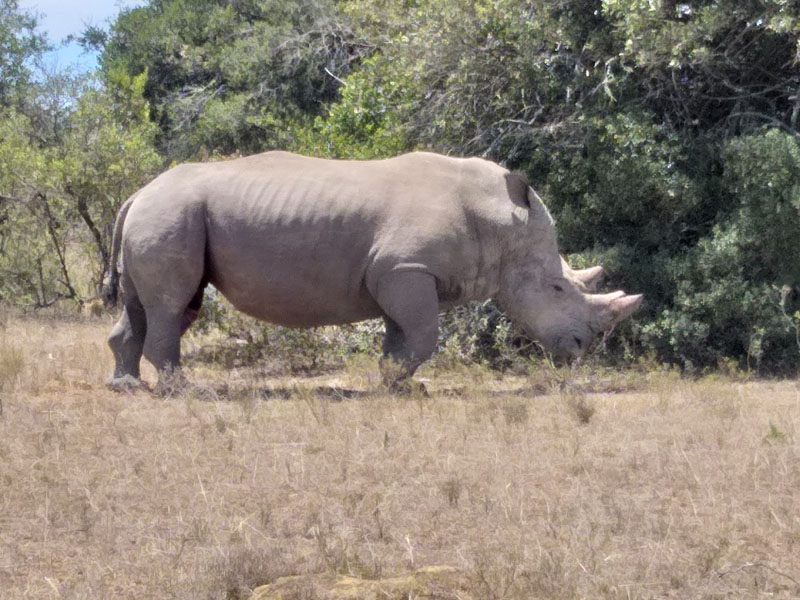 The male rhino who got to his feet when we arrived to pose for us. 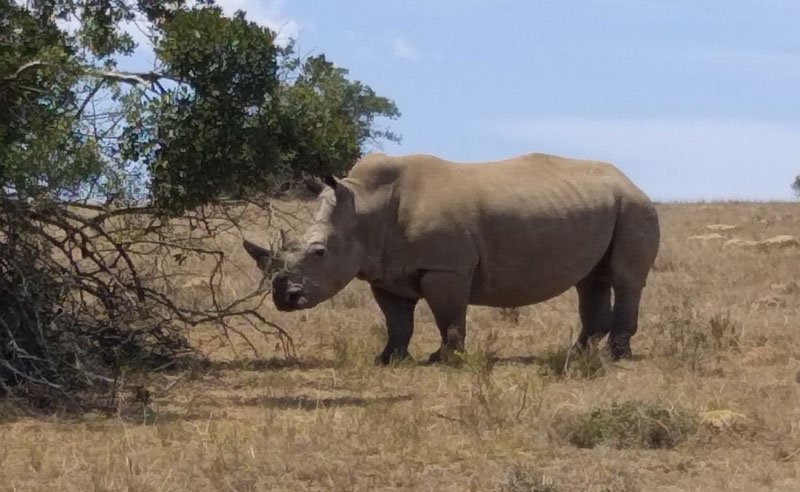 They are grazers, and so have thick bottom lips. As a result, the Dutch settlers to Africa called them the Wyde-mond rhino – literally, Wide-mouthed rhino. The English settlers misunderstood and thought they were calling them the White Rhino – and the name stuck to this day.

So far, we had only seen two of the Big Five, when suddenly, around the corner, heading straight for us on the narrow dirt track we were confronted with — 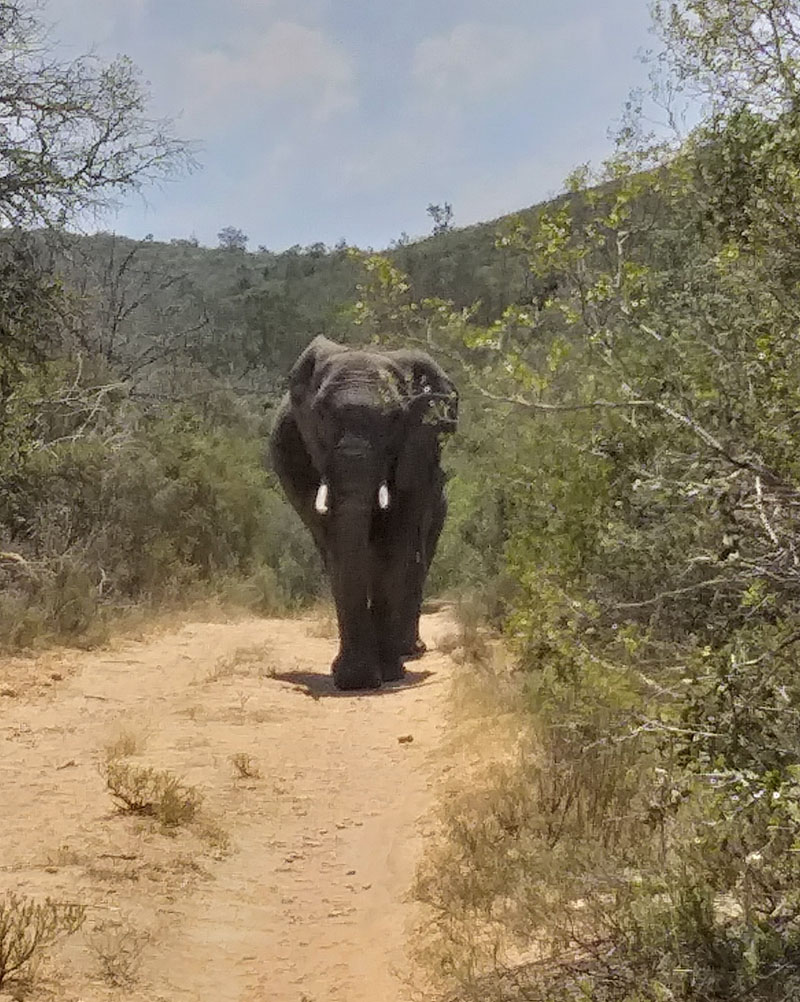 Daddy Elephant out for a stroll followed by his wife and youngster. Who has right of way?

Fortunately, he decided to be a gentleman and stepped into the bush, and disappeared silently. Absolutely amazing!

Our guide calmly switched off the engine and just sat watching him, confident that the elephant would give way to us. He did too! Followed by his wife and a youngster, they just disappeared without a sound. Quite incredible.

We saw other animals, but they weren’t so photogenic. Like the two hippos bobbing with just their eyes, nostrils and ears visible, and every now and then disappearing beneath the water.

As we returned to the hotel, Densely turned the vehicle to take us to the Conservation and Rehabilitation center. I thought this would be like a museum with a lecture – but it was amazing.

Kwantu takes part in rescuing baby animals where the parents have been poached, and animals destined for overseas zoos. Where possible they are reintroduced to the wild when they are well enough or returned to the wild in their own country. But often this is not possible, due to genetic or other reasons. In this case, they continue to care for them and where possible use them to breed.

The two most magnificent beasts we saw were: 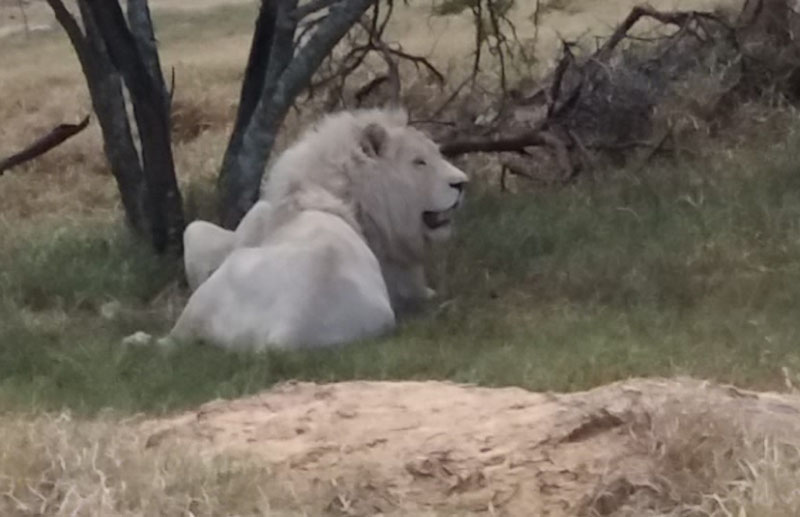 This magnificent white lion who was destined for an overseas zoo before Kwanu stepped in and rescued him. 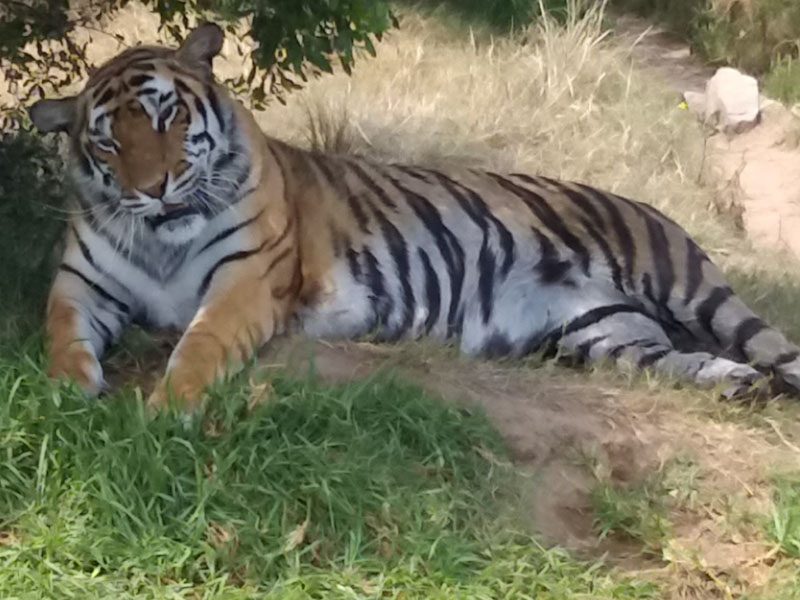 This stunning tiger cannot be introduced to the park as they are man-eaters, and the reserve would no longer be able to use open vehicles for game drives.

Several times, during the drive, I found myself wishing I had done this game drive before tackling my book, God in Africa. And yet, I was delighted when he kept mentioning facts not normally known to the public, which I had included in my book! So much so that I gave him a copy of God in Africa when we parted at the end of a glorious drive.

We ended the morning with an incredible slap-up meal in their beautiful dining-room once again. I even ate food which I had never tried before. (Only my family will know how unusual that is!) I ate and LOVED curried prawns on a bed of rice. Yummy!

So I feel as if my own personal African Safari, first through all the research for my book, then through our Africa Book Safari, was brought to a wonderful end yesterday. Except I’m already under pressure to write a follow up to God in Africa. If I do, I will be asking you all to pray that we can return to Kwantu, this time to stay overnight so we can go on a night drive as well as another morning drive.

Have you ever been on a game drive? If so, what was the most thrilling part for you?

If not, would you like to go, and what would you most want to see?

Please leave an answer in the comment section below. I will respond – and if you leave me a URL to our website I will visit you there.

Don’t forget to come back tomorrow to read the round-up of our virtual Africa Safari!

Celebrating fifty years of fruitful ministry, as well as many more years living in this wonderful country God has placed us in. Click To Tweet