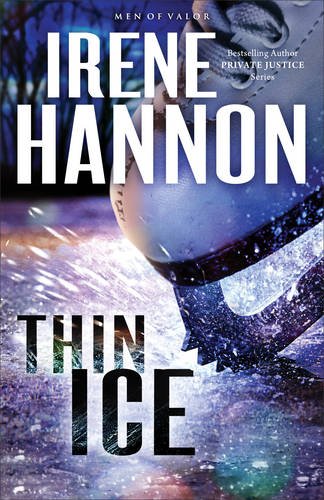 I was delighted to receive notification of another Irene Hannon novel, and I certainly wasn’t disappointed.

Thin Ice by Irene Hannon is the second book in the Men of Valor Series.

World-class skater Christy Reed lost her parents in a car accident, then some time later, her beloved sister, Ginny, perished in a house fire. Christy has battled to get her emotions and life back under control. Then suddenly, two months later, an envelope arrives in her postbox, addressed in her sister’s handwriting. It contains a short note that claims Ginny is still alive, but warns her not to share the news with anyone, especially the police, or she will face the death of her sister—again.

When she realizes her sister has in fact been kidnapped, she decides to report it to the FBI with the request the investigation is kept undercover.

Lance McGregor, ex-Delta Force operator, is a newbie to the FBI squad when he is told to re-open the case of the house fire. If it wasn’t Ginny who died in the fire, who did? And where is Ginny? Why would anyone kidnap her?

A few chapters into the book, readers receive glimpses of what the perpetrator is up to, and it is clear Christy is in extreme danger. However, there is no indication as to why the fire and kidnapping happened, or what he has planned for Christy.

Christy and Lance team up and despite the suspense it is clear they are falling in love. Unlike many romance novels there is no obstacle to their relationship, apart from the threat to Christy’s life. Christy has a strong faith which rubs off on Lance, and there is no sex or swearing in the book although there is plenty suspense. Readers who have read other Irene Hannon novels will recognise the McGregor brothers. The story is complicated by a crisis with one of the brothers, and Lance is torn in trying to balance his time between the two situations.

Out of all Irene’s books, I think this is the best I have read so far. Her characters are well developed, the plot line gripping, and the end has a twist I didn’t see coming.

I strongly recommend this book and I have no hesitation in awarding it five stars. It can be purchased here.

I received a free advanced digital copy of this novel from the publisher through the “Revell Reads” program in exchange for my unbiased opinion. Thank you to them and to Net-Galley for making it available.