On Thursday, we had a surprise visitor. She had come to ask us to take on the editorship of a local magazine. It is a beautiful magazine, usually 28 pages in full color. Although we have never tackled such an ambitious project, nor do either of us have any experience using the particular desktop publisher software they use, we are well-qualified in other ways. We have run countless church magazines down the years, but always black and white, and very straight-forward layouts. This magazine is beautifully put together and looks very professional.

We have both produced many brochures, leaflets, adverts, and of course, I make all my own book covers. We also have a fair knowledge of Word and I do a lot of editing in my daily writing responsibilities. So yes, it sounded good. It would be a learning curve for us both, but what’s new? Our lives seem to be seasoned with learning curves! We were fairly confident we would manage the task, and we would certainly enjoy the work.

However, we have learned things seldom turn out to be as simple as they first sound, especially when computers are concerned. There were a few things we needed to be sure of, and we agreed to pray about it. No commitment. We would pray, and I would find out more of what was involved from the person best equipped to tell me—the current editor.

The following day, I went to see the editor, and she gave me a quick run-through of what it involves. She assured me that she would give us both all the training we needed, and would be there for us if we needed help. Sounded good? Yes, it did. Until I saw how much work was involved.

God’s Plans for Our Lives

As you possibly know, I am currently working on two book-length projects. I have a completed draft of a non-fiction book: Reflections for Pastor’s Wives. That is currently on hold as I work on a novel, Finding Amanda, which you can read about here.

Both of these are projects I’m excited about, and I know God plans to have them published. I believe He will use both in different ways to build His Kingdom. In addition to this, I run about six Facebook groups and help my husband who is establishing a new and exciting online-ministry that is already reaching people with God’s Word across the world. (See more here.)  And of course, I blog weekly.

We know these are part of God’s plan for our lives. Would we be able to continue with all of these and give them as much time as we currently do? It soon became apparent we wouldn’t. Something would have to give.

I also have a hobby of card-making, which at the moment is on hold because the only time I have to do them is in the evening, and by then I am too tired to be bothered. Plus of course, thanks to the restricting pandemic that affects us all, I have no market to sell them.  (I don’t make them to make money, but I do need to cover my costs so I can keep myself in supplies.) I would have to give that up completely if we accepted the magazine task. 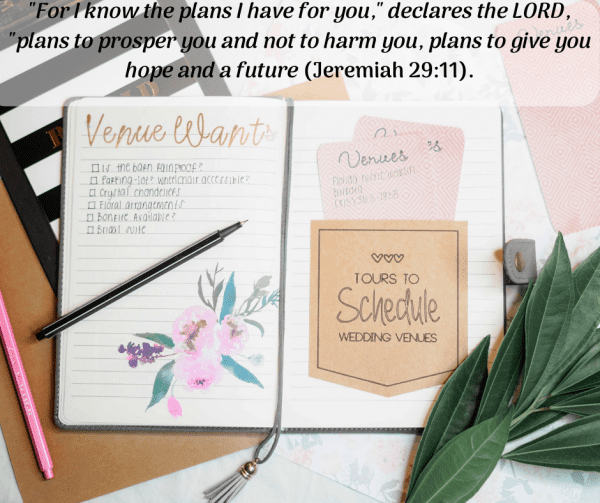 What were God’s plans for us?

I also chatted to two friends who know me well and are aware of my ability to over-commit. They agreed to pray for our decision, but both were wary about whether we would be able to continue with the work we’re doing for the Lord if we were to take this on.

That night, we went to bed aware that we needed to make a decision the next day. If we were going to say, “No”, the organization needed time to look for another editorial team. We awoke the next morning, totally convinced we had to say,  “Thank you, but no. This isn’t part of the Lord’s plans for us.”

And we knew this was not part of those plans.  We’d no sooner passed on the news than we had a sense of tremendous peace.

Now I faced the responsibility of getting on with my novel. I am committed to completing Finding Amanda during the month of April, during Camp NaNo for those of you who know about this global writing challenge. (You can read more about it here.)

Plans? Or No Plans?

Writers generally fall into one of two categories. You have the Planners and the Pansters. The Planners like to plan out every detail of their story before they start to write. Pansters write by the Seat of the Pants, hence their strange title. They may know their main characters, then they just start to write. In ways only writers can understand, the characters take over and the story unfolds. Recently, a third category has been identified: the Planster. As you can figure out, this is a combination of the other two.

I have always written Seat of the Pants until now. But this novel, I could see most of the plan before I started to write. So I sat down and created a time-line on my computer which I have printed out and stuck to the wall next to my working space. Within a short time, I had planned out the entire book, and I felt excited about fleshing out the storyline, as the characters showed me how they were going to achieve the various points.(Seat of the Pants!) Here it is, if you haven’t read about it yet.

There were a few gaps that I didn’t know how they were going to work out, but I was confident I would come up with a plan, or perhaps I should say my characters would.

Last night, the same day we had turned down the magazine offer, I spent the night working on my novel in my sleep. I wasn’t really dreaming, I was planning. Yet I was asleep. As the night progressed, I saw more and more of the plans coming together. By the time I awoke, I couldn’t wait to make notes before I forgot key elements. And so, just like that, I had the missing gaps all filled. Now I just need to give the plans to Amanda and the other key characters and let them run with it.

Living and Writing According to the Lord’s Plans

That’s when I realized how exciting it is to write for the Lord. Where the Panster creates plans for her story, and the Panster leaves that up to the characters, I have now become a Planster! And by committing the novel to the Lord, I am assured that where I may not know everything that’s going to come together in the story, the Lord does.

And that’s the last thing I shared with Rob. How real this Scripture is. The Lord has plans for me. But more than that, He has plans for Amanda! Plans that will bless His people as they read the novel. I have never thought of this before! Do you find this exciting? Or far-fetched?

When you hand something over to the Lord—it becomes His challenge. And He will come up with plans way beyond any that you may think of on your own.

Are you a writer? Which of the three categories do you fall into?

If you’re not a writer, how do you live your life? Is your life guided by goals and plans and lists? Or do you live by the seat of your pants? Please answer in the comments. I’d love to hear from you!

8 comments on “He has Plans for Our Good ~ and for My Main Character!”