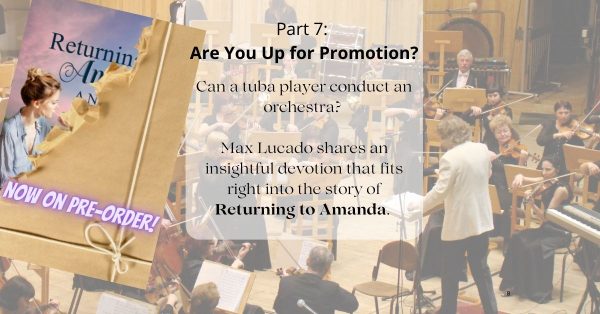 Each week, I’m sharing some of the background to my debut novel, Returning to Amanda. This week, I’m taking a slight deviation. You’ll see why in a few minutes. A few days ago, I read a thought-provoking devotional message written by the well-known author and pastor, Max Lucado, and I was excited with the way it tied into Amanda’s story! So I thought I’d share some snippets of it with you today.

Who is Max Lucado?

He is a pastor of Oak Hills Church, a nondenominational Christian megachurch in San Antonio, Texas. He is also a bestselling author of self-help books. I personally have read many of his books, and am constantly blessed with his insight, and the way he turns the most ordinary situations into such thought-provoking meditations.

I am currently reading God is With You Every Day, a devotional book of 365 meditations, with each one taken from one of his books or sermons. 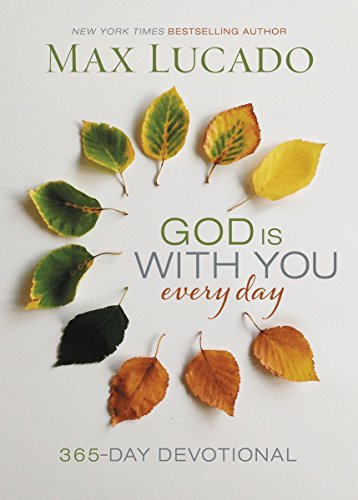 His August 16th reading is titled The Promotion. He tells of how he was the senior minister of his church for over twenty years, and how happy this made him. However, he found his mind constantly gravitating toward the next sermon or series. As the church grew, so they took on more staff. More staff gave him more people to manage, and more time spent on tasks he didn’t feel called to do. He wanted to research and write his sermons.

Eventually, he was able to transition from being the church’s senior pastor, to become their teaching minister. Almost immediately, people started to ask him if he missed his position as the senior pastor. He realised that many people saw his transition as a demotion. He was no longer the senior minister. But he had come to learn that promotion in God’s eyes is not a step up a seniority ladder. “It is a move toward your call,” Max says. He goes on to urge his readers,

Do You Play the Tuba?

Max uses a clever illustration, “Not every tuba player has the skills to direct the orchestra. If you can, do it. If you can’t blast away on your tuba with delight.”

I loved this devotion, and if by any chance you’re reading this, Max Lucado, thank you so very much! You see, this is really what Returning to Amanda is all about.

The surface story is about a stressed-out pastor’s wife running away from her overwhelmed minister husband, and the chaos this causes all around. But the real story beneath the surface is that the tuba players in the congregation need to pick up their instruments and start to play them. The real conductor must step up to the podium to direct the orchestra. And Mandy needs to pick up her instrument and hone her skills.

We all have gifts. And we all need promotion. But it’s not a case of being promoted to a more senior position. We need to move closer to our calling. To find, and grow in, the area of service that God had in mind when He created us. That is true promotion.

How about you? Do you know what task God has specially lined up for you? Are you growing closer to fulfilling that call? Are you seeking promotion into the role He has for you? How about sharing with us in the comment section, what God is calling you to do right now?