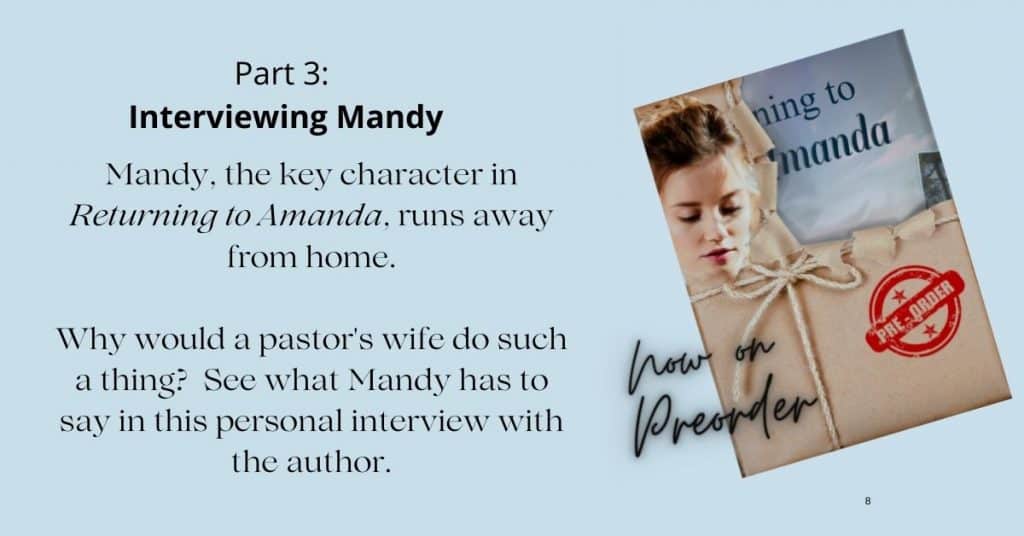 Getting Up To Date

In the first post, A Debut Novel at My Age?, I told you how I had created a family for a novel I wanted to write about. That was twenty years ago. I drew up a list of characters, knew what they looked like, got to know them well. As I said in my second post, Write What You Know, I chose to write a story about a pastor’s wife and her family. I also assured you that the Douglas family is nothing like mine! (Thank goodness for that!) If you have read those posts, you’ll also know my novel had a major weakness. The main character, Mandy, the protagonist, was so weak and ineffective the entire story fell flat. So what to do?

Well, it was taken out of my hands. I’ve finally managed to pin my runaway pastor’s wife down for an interview, and let’s see what she has to tell us her side of the story.

Read my interview of the main character of my soon-to-be-released novel, Returning to Amanda. Click To Tweet 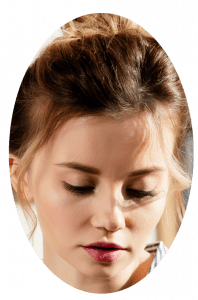 SC: Good morning, Mandy. Or is it Amanda? I’m a bit confused with your two names. I didn’t mean you to have two.

MD: Good morning, and it’s Mandy. You should know that. I’ve been Mandy for many years.

SC: So why is the book called Returning to Amanda?

MD: Because I got fed up with being Mandy, the ineffectual wimp you had turned me into. I decided I’d had enough, so I ran away. I know you hadn’t expected that, and if I hadn’t been so terrified I would have enjoyed your panic when I boarded that plane!

SC: I still don’t understand why the book is called Returning to Amanda if you went by the name Mandy though.

MD: Because as you may remember, I used to be an artist. You should know that. You started me off that way. And I was known as Amanda. That was before I became Mandy, the pastor’s wife. All I wanted to do was return to my art, but you wouldn’t allow me to.

SC: I wouldn’t allow you to? Excuse me? I thought it was Owen, your workaholic husband who wouldn’t let you? He wanted you to help him run the congregation.

MD: And who created Owen? So ultimately it was you that prevented me reaching my dream. But going back to Owen, yes, he wanted me to be a proper pastor’s wife. But that didn’t fit in with the way God created me.

SC: So when did you realize that God wanted you to be different?

MD: It wasn’t God that wanted me to change—it was Owen. But for me, the eye-opener was when I read a book about the Motivational Gifts of the Spirit, loaned to me by my friend, Carey. Although it took me a while to recognize what my primary gift was, I soon realized the gift I didn’t have. And it was the one both Owen and the entire congregation though I should have.

MD: Sure. It was as if the congregation had a mapped out plan for the character of their pastor’s wife. She had to be a gifted server, that is someone with the gift of service. Someone who just wanted to serve the congregation. Bake cakes, arrange flowers, play the organ …

SC: You played the organ?

MD: No, of course I didn’t. Nor could I bake a decent cake. And I certainly couldn’t arrange flowers! None of these things were me. But they were requirements for the pastor’s wife at Aloevale Community Church.

SC: Couldn’t you have talked to Owen? Surely, he’d understand?

MD: Huh! Talk to Owen? Did you not see how often I tried to talk to him? He was always too busy, rushing out to a meeting, or coming home late and overtired.

SC: And so you just ran away?

MD: Well, Owen wouldn’t listen to me. The congregation kept pressing me. The twins were impossible and kept doing things behind my back. And Holly was a typical teenager, but at thirteen-years-of-age she wanted to behave as if she was nineteen. And as for you …

When the Author Gets Stuck

SC: I didn’t know what to do. The characters all seemed well developed and independent, and you just let them carry on as they wanted.

MD: Yes, because I was a wimp. I know that now. Eventually things came to a head and I stepped right out of character. I know now it was a crazy thing to do, but I had to do something or I was going to have a breakdown or something. You gave me the idea.

MD: When I went to the letterbox that day and found the ridiculous bright pink envelope, I read the contents, and I knew I had to go away. I tried and tried to talk to Owen but he was just too busy. Then we had that huge bust-up over dinner, and later in the bedroom. The next day, I knew. I couldn’t do this any more. I had to get away and think.

SC: So without further ado, you hopped on the first plane and flew away, leaving your husband to cope with the church and three kids?

MD: I know. It was pretty beastly of me. But you know what? It worked out for the best. I was able to rest up and do a lot of praying, and best of all, I found out who Amanda really was. That’s why the book’s called Returning to Amanda. I found myself during those few weeks.

Another Crisis for Mandy

SC: And in the meantime, there was another crisis approaching, wasn’t there?

MD: Yep. Initially I didn’t pay much attention to the Corona Virus as it was initially called. So it took me by surprise when we headed into lockdown with no inter-provincial travel. That was a real blow. But I can’t say any more, or your readers won’t need to read the book!

SC: Well, in closing, I need to say thank you for taking over. You nearly caused me a heart attack, but you certainly took the story into a whole new realm and it woke everyone up. How do you feel about the story now?

MD: For a while I thought I’d ruined everything, but I am glad I did it. I am still Mandy, but it was good to get back in touch with Amanda too.

Questions for Mandy from the Launch Team

SC: Mandy, before I let you go, I have two questions for you from members of the lovely team that is helping me launch my book.

SC: Allyson Koekhoven asks, “Why did it take you so long to take that next step in your life?”

MD: Good question, Allyson. I’ve often asked myself the same question. I think it’s because I kept hoping for my old Owen to come back. We had a very happy marriage in our early days, before we moved congregations. Then I realized it wasn’t just Owen. I was waiting for the congregation to change. And that wasn’t going to happen. So I knew I was the one that had to change.

SC: Thanks for that. I hope it answers your question, Allyson. Next question is from Deryn van der Tang. “Mandy, when did you first feel your soul was shriveling up?”

MD: Deryn, I’m sure you’ve heard the metaphor of the frog who is boiled alive?  If he was put suddenly into boiling water, he would jump out, but because he starts off in tepid water which is then brought slowly to the boil, he doesn’t realize what’s happening, and gets cooked to death. I suppose that’s a bit dramatic, and I probably wasn’t being cooked to death, but that’s how it began to feel. I knew if I didn’t get out the water, I’d be cooked. My faith would be destroyed. I hope that helps.

SC: Wow! Well, I never saw that coming. Thank you Mandy. You have become quite the orator! In my next book …”

SC: Well, you’ll certainly be in it, but it’s going to be your good friend Carey’s story! But I see I’ll have to give you opportunities to speak!

Thank you so much for answering all our questions.

Everyone, I hope you’ve enjoyed that short chat with the protagonist in Returning to Amanda, Mandy Douglas. Or would that be Amanda?

Next week, I’m going to talk a bit about the cover. That has a story on its own.

It is exciting watching the pre-orders start to come in.

Over the next week or two, I hope to start converting the book into paperback format.

If you haven’t yet read the previous posts in this series about Returning to Amanda, I’m sure you would enjoy them.

A Debut Novel at My Age?  How and why this book took twenty years to write.

Write What You Know  That’s why this is about a family in the ministry.